Artio to Arthur - The Path to Caerleon 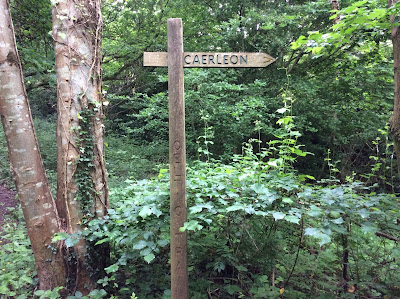 As well as being a poem which presents the landscape of Britain using Welsh words as signifiers, The Sleeping Lord presents a landscape which contains the 'Sleeping Lord' of its title not simply in the traditional legendary sense of him lying asleep somewhere beneath it awaiting the hour of need for his return, but as the poem's concluding series of questions has it:

Are the slumbering valleys

are the still undulations

the still limbs of him sleeping?

Is the configuration of the land

the furrowed body of the lord

are the scarred ridges

do the trickling gullies

Does the land wait the sleeping lord

or is the wasted land

that very lord who sleeps?

This represents Arthur very differently from the view of him as the Romano-British 'Director of Toil' in the fight against Saxon invaders, different even from the early Welsh representation of him as the chief of a band of adventurers who interact with giants, witches and magical  adversaries. It is in absolute distinction to the 'king' of later medieval romance. Rather it presents him as a chthonic embodiment of the land itself, sleeping not beneath it but as the land sleeps in winter or when it is 'wasted'. In other parts of the writing, particularly in the central section, set out as prose rather than verse, Arthur's legendary attributes are evoked. But in both the beginning and the end of the piece he appears as the land itself: "his bed deep on the folded strata". Yet this is a poisoned land, wasted in ways that even a Brythonic warrior cannot have imagined:

Is the Usk a drain for his gleaming tears

who weeps for the land

who dreams his bitter dream

for the folk of the land

does Tawe clog for his sorrows

do the parallel dark-seam drainers

with the scored valleys’ tilted refuse?

A similar, though more briefly sketched, view of Arthur in this light also appears in the shorter fragment 'The Hunt', based on the boar hunt in Culhwch and Olwen: "was he riding the forest-ride or was the tangled forest riding?". There is a quite startling development of this when it is suggested of "the bleeding man in the green", as he turns to meet the riders who follow him and their eyes meet, that "it would be difficult to speak of so extreme a metamorphosis", as if only then does his humanity return.

This is the ground of his being. In spite of his own attachment to the Christian mythos, David Jones suggests, in a long essay on 'The Myth of Arthur’,(1) that Arthur’s origins might be found not in a defender of Romanitas, but farther back in an Iron Age bear goddess. His appellation of Arthur as 'the Bear of the Island' conflates this sense of him as a warrior of wild-animal ferocity (a common feature of heroic poetry) with a sense of his origins as an actual bear deity. The discussion of him in the essay references Gaulish inscriptions of a male bear god Artaius and a female deity Artio and suggests that the bear might have been a totem animal for the earlier Gaulish tribes and that "the hero god may later have become associated with Arthur the man-hero". He notes that there are other precedents for agricultural deities becoming gods of war, and that this was so for the early development of the Roman Mars. A bronze statue of the goddess Artio was much more recently shown in the exhibition 'The Celts' which toured Britain a few years ago. It has the inscription 'To the Goddess Artio, dedicated by Licinia Sabinilla'.

What is particularly interesting about this statue  is that the exhibition catalogue notes that the human figure is a later addition and that the statue was originally just the bear figure (2). The assumption is that the addition occurred when the statue was acquired for use in the Romanised Gaulish villa where it was found. This suggests that the original statue reflected an earlier practice of representing the deity in animal form, but that this was unacceptable to the romanised individual who acquired it so the human figure was added. The statue was found in northern Gaul. Inscriptions to the male god Artaius are recorded mainly in the south which was romanised earlier. One reads  "to Holy and August Artaius".(3) Was there a male and female pair of bear deities or, as David Jones suggests, did one develop into the other? A shift, that is, from female to male and then on from animal to humanised deity.

If so, how might a bear goddess and god, recorded in epigraphy and iconography in Gaul, become the Arthur of British tradition? Clearly bear deities did not fit well with the tendency of the Romans to assimilate Celtic deities to their own pantheon, but these bear deities are attested and did survive Romanisation, at least for a time. So when a heroic figure resisting the Saxons is commemorated in the ninth century Welsh-Latin Historia Brittonum with the same  'Arth-' (bear) stem to his name, and as such a name is not common, it is worth asking where this name might have come from. It also  the case that the name Arthur is attached to a figure in early folklore in Welsh which feeds into such literary manifestations as the tale Culhwch and Olwen, an Arthurian story which predates the appearance of Geoffrey of Monmouth's shaping of Arthur in his 'History'. Surveying early Arthurian literature in Welsh, O J Padel has written; "the Arthur of local legends and magical animals is the dominant one until the 12th century, when the military one becomes prominent". (4) This early Welsh Arthur was a leader of a group of rugged and often themselves magical individuals rather than a 'king'. Padel compares them variously to Robin Hood's band and the Fianna under Finn in Ireland. In this context it is easier to see how such a view of the emergence of Arthur from a bear deity, and such a representation of him as the Green Man or a chthonic Sleeping Lord, begins to make sense.

Arthur's continuing presence in folklore as a giant should also be borne in mind, as should the legend that his wife Gwenhwyfar was the daughter of a giant. This view of him seems to have easily survived his translation to the king of medieval romance and seems to be persistent from earlier traditions. It is reflected in many landscape features such as 'Arthur's Seat', suggesting a giant-sized occupant; there are many cromlechs, other megaliths and large rocks citing Arthur in their name or with a legend connecting him to them. Other members of Arthur's retinue such as Gawain are also credited with gigantic stature(5).  In Culhwch and Olwen the ‘chief giant’ Ysbaddaden Pencawr says that Arthur is one of his men although he is helping Culhwch to fulfil the task that Ysbaddaden has set for him. It is easy to see how a folklore giant who becomes human might later be portrayed as confronting or otherwise dealing with giants. Arthur's dog is called Cafall (horse) making it a suitable sized dog for a giant.

All of which underlines the metamorphic nature of mythic narratives, legends and folk memory. Though contexts and forms of representation might change, the underlying figure remains. The sequence "Bear - Goddess - God of the Soil - God of Weapons - Romano-British General - Christian King..." (6) suggests that we make what we will of what has come down to us from the storehouse of our mythic life. It’s a long way from bear deity/giant/chthonic-sleeper to the ‘Dux Bellorum’ of Roman Caerleon and then on to the ‘king’ of medieval romance.  Many accretions have been accumulated on the way. The task, then, to conclude with David Jones: “ ... is to make significant for the present what the past holds  ..... this is the function of genuine myth, neither pedantic nor popularizing, not indifferent to scholarship, nor antiquarian, but saying always ‘of these that thou hast given me have I lost none’.” (6)

All verse quotations from David Jones The Sleeping Lord (Faber, 1974)