AFALLENNAU : Myrddin in the Wildwood 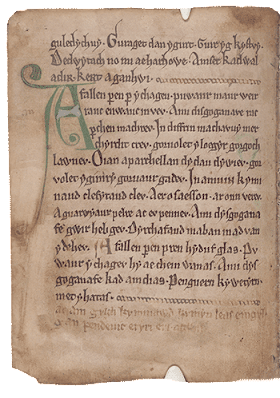 The oldest of the verses in The Black Book of Carmarthen are thought to be those telling the story of Myrddin Wyllt, particularly the Afallennau sequence, and within that those that tell of his life in the Caledonian Forest. These are framed by verses containing prophecies which, according to A O H Jarman, were later additions fulfilling the political purpose that prophesies often did in the Middle Ages. Jarman distinguishes these prophetic verses from the earlier ‘mythological’ verses which he thinks may have been attached to a lost saga telling Myrddin’s story (*).

There is another sequence of verses telling the same story in the manuscript known as Peniarth 3. Some of these verses are the same as those in the Black Book, some are different, and they are in a different order. Ifor Williams dates the Peniarth verses earlier than those in the Black Book but also suggests that they come from a different source (**). This implies a lost original with multiple variations of which only two survive, though they may also have given rise to other sequences such as the prophetic verses contained in the ‘Prophecies of Myrddin and Gwenddydd’ in The Red Book of Hergest. Gerald of Wales, writing before the Black Book verses were copied, also claims to have seen a manuscript containing Myrddin’s prophecies in Nefyn in North Wales. (***).

Clearly this material was shaped and re-shaped for different purposes in the Middle Ages. The verses below are the result of my own re-shaping, partly based an earlier one I wrote about the Battle of Arfderydd written several years ago and partly on loose translations made more recently of the core verses in the Black Book. I would have liked to include some version of the Peniarth 3 verses too, but further study of these will have to wait until research libraries are open again, when the sequence may be extended.

we bit the bitter core

of that battle and gulped

his last breath as Rhydderch’s shield

was held high over the land.

I stole away by ditch and field.

Where could I hide but the wild wood

from Rhydderch’s men? That tree

with apples on its boughs

guards the glade they cannot see.

fester slowly into another year

a freight of sadness.

The cycle broken: the circle

shrunk to this one glade

in the wildwood; defeat

dogged us but I made

A spell here and grew hair

under leaf shade ashamed but undefiled

by the new lord’s common law.

Under the mantle of this tree

cast wide over the glade,

my refuge from fear,

and from the bustle of far-folk,

and cast a cloak of stillness

and silence to succour me,

even when wolf calls, when wind blows

and the forest sings in a clatter

of branches and leaves

and owl’s quaver is carried

through the quiet of the night,

or when I hear the screech of jay

through the soft hum of day

in the long hours of summer.

and I dwell here harried

by ice and snow - where else to go?

For this is my world

contained as an apple seed,

settled in a hidden nook

to grow a new life

far from the rumours of battles

and the hurts of the world.

Sweet apple tree that grows in this grove

you know how to hide me from Rhydderch’s men

milling around, a host of them, richly arrayed.

But there is no Gwenddydd to greet,

her love lost to me. No woman comes

for delightful dalliance. Once I wore

a gold torc around my throat, now

the necks of swans are splendid to me.

here in this hideaway I hear

Gwasgawg curse me day and night

for the slaughter of his son

and of his daughter.

Sweet apple tree that grows by this river,

by rushing water, your fruits out of reach

of any intruder. Once I dallied here beneath them

in wanton play with a graceful girl, a lost companion.

Time tracks away: wild time in the woods

of bards and the songs of minstrels

heard only now in the empty space

that is their absence. All that was dear

in the court of Gwenddolau, my Dragon Lord,

Echoes through the trees of Celyddon,

all that sustains me.