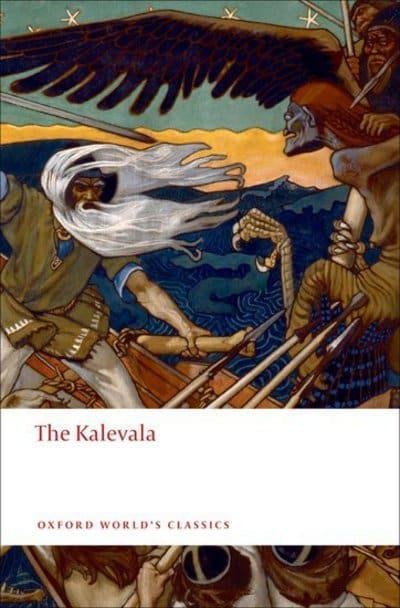 One of the most recent rendering of oral folklore and myth into an epic cycle is Elias Lönnrot’s The Kalevala, shaped as a literary creation in the nineteenth century out of the author’s research collecting oral lore in stories and songs in Finland and rendering them into a continuous narrative in verse. As such it compares with earlier renderings of traditional lore such as Snorri Sturlsson’s Edda and also provides some insights into how oral sources can be shaped into literature as they are in some of the medieval Welsh tales collected as ‘The Mabinogion’. I have dipped into The Kalevala before in a prose translation but have only recently fully engaged with it in Keith Bosley’s vivid and highly readable verse translation. It is the work of a poet, it is also a work where things happen by the right words being found and spoken to make them happen: “Steady old Väinämöinen. put this into words, spoke thus” and because his words are better than his opponent’s words, the battle is won.

What is striking is the way that the chief characters simultaneously inhabit the personas of gods, shamans, bards and ordinary human beings. This too is reminiscent of, for instance, Rhiannon in the medieval Welsh tales riding magically across the landscape from the Otherworld and then continuing to live here as if she were a human character while also appearing in another tale in the cycle with magical birds that can sing people into an enchanted state. The main character in The Kalevala is Väinämöinen who is first met as an agent of the Creation, helping to put the sky in place and shape the world as we know it. But he continues to inhabit that creation as a human being, sometimes with enhanced powers but at other times as a vulnerable person with all-too-human weaknesses. He is a bard who can use his songs as powerful spells, turning aside the songs of a young rival and consigning him into a swamp with his own songs. He is a shaman who journeys to Tuonela, the Land of the Dead, to gather spells from another powerful shaman who has died. He also travels there to get the words he needs to create a boat to go to woo the daughter of The Mistress of Northland, though when he goes to her his friend, the younger Smith God Ilmarinen, is the preferred suitor and he must stand meekly aside.

When the focus then turns to Ilmarinen, the Smith is given apparently impossible tasks to fulfil, consonant with the international folklore motif of the wooing of the  'Giant's Daughter' or the 'Magician's Daughter' also contained in the medieval Welsh tale of Culhwch's  wooing of Olwen. But it is not, as there, the father that sets the tasks but the mother, The Mistress of Northland, and it is now Ilmarinen who must travel to Tuonela to fulfil one of these tasks. Having done so the narrative continues to treat the wedding and subsequent events as if they are the domestic arrangements of ordinary humans, incorporating elements of the folklore wisdom of rural life in Finland. This shifting of the signifier backwards and forwards from mundane through heroic to divine activities occurs quite naturally as the narrative progresses and Bosley’s verse translation (using a short seven-syllable line as a base, but varying from five to nine syllables where required) is always fully engaged with these shifts of significance and evocative in its expression of them at all levels.

In Väinämöinen’s bardic prowess and his claims to having been present at the Creation, there are echoes of Taliesin’s boasts, but also hints as to the possible origin of his bardic identity as a divine figure. Similarly, in his journeys to the Netherworld to get what he wants, in particular to regain words and songs that “should not be hidden” we might also think of the claims of Taliesin or other bards for the source of the Awen. If Arthur and his warriors raid Annwn for loot, Taliesin might have had other ideas about what the cauldron would yield, and it is no coincidence that he is also present at the other cauldron quest to Ireland related in the Second Mabinogi. As for raids on the Otherworld, The Kalevala has a raid on what appears to be Lapland in the North to capture a mysterious object called the Sampo which The Mistress of Northland has hidden in a mountain. Northland, or Lapland, seems to function here both as a rival territory and as an Otherworld location, but separate from Tuonela, the Netherworld. This parallels the way that ‘Lochlann’ in Irish stories can variously function as a name for Orkney, Scandinavia or as an Otherworld place, or as the ‘Old North’ in Welsh tales is often a location for Otherworld encounters. Similarly the expedition to Ireland in the Second Mabinogi in some ways parallels the raid on the Otherworld in ‘Preiddeu Annwn’ in The Book of Taliesin. But The Kalevala raid is not entirely an attempt to loot someone else’s treasure as one of the raiders is Ilmarinen who, earlier in the cycle, had created the Sampo in exchange for being able to woo the daughter of The Mistress of Northland, though she at that time rejected his advances. Here, again, Väinämöinen and Ilmarinen seek to free what has been hidden, regaining an object removed from the world that should have a use in the world.

Looking for parallels across different mythologies we should not ignore the differences that make each set of stories culturally specific. The fact that we can identify international folklore motifs in stories from different cultures is certainly signficant, and when we encounter them they often resonate both because they are essentially the same story and because of their distinct differences. We recognise the characters in The Kalevala as gods not so much because of who they are but by what they do. Falling into mythological patterns of behaviour which are recognisable across cultures is one of the clues. But characters in folk tales often also do this without obvious signs of divinity. What makes the characters in Bosley’s translation so obviously divine and yet so characteristically human is a mode of presentation that unselfconsciously allows them to be themselves in a particular landscape and yet transcend that particularity by their enactment of divine themes.

These gods are not remote. They can be lived with, admired, disapproved of, sympathised with, just as people we know in our own lives. Yet they remain larger than life and so can speak to us from another culture and also illuminate our own. At the end of The Kalevala there is an account of the coming of a new god, announcing the arrival of christianity (though churches are mentioned in the preceding chapters) as if to say ‘the time of these gods it at an end’. Väinämöinen bows out after the son of a virgin who had become pregnant by eating a cowberry banishes him, declaring as he goes:

Just let the time pass
one day go, another come
and again I’ll be needed
looked for and longed for
to fix a new Sampo, to
make new music

He leaves behind him the Kantele, the source of music which he had created. But he leaves the world he had helped to create. The folklore sources suggest that acknowledgment of the old gods had run concurrently with christianity for some time before this. There are several references to “The Great Bear”, the constellation that dominates the northern skies, as if it were of cultic significance. ‘God, keeper of heaven’ is often invoked as the source of storm clouds as when the trickster figure Lemminkäinen asks him to whip up a storm so he can escape his pursuers after killing The Master of Northland. One of the set formulas of this epic is that things can be tried three times and the attempt to effect things by spells - spoken words of power - generally proceed by first addressing a local spirit, then a demon and finally ‘The Thunderer, the Old Man, the One in the Sky’. The implication is that there is a final resort to an ultimate God figure, but one who can told what to do if the right words are used. He seems to function as one of the multiple identities and levels of existence that are encompassed in these stories. But when he baptizes the son of the virgin who had eaten the cowberry everything changes, things become set and the old world passes. Yet still lives in this epic.

The Kalevala : An Epic Poem After Oral Tradition
by Elias  Lönnrot  Translated by Keith Bosley (Oxford, 1989)