SNICKET : a narrow alley between houses - chiefly Northern English (of unknown origin) - Compact Oxford Dictionary
I hadn't thought of this word as specifically northern before checking, but my most memorable experience of using a snicket is, in fact, from Lincolnshire. Visiting my mother there in the village where she had retired, I used to walk to the village centre to go to the shop and post office for her. I discovered a route that avoided using the road but instead took me along a back lane behind cottages, then along a narrow snicket between two small housing estates which took many turns around houses, past garden fences and across two access roads before emerging into a small open square with a tree and a park bench from which a footpath led onwards to the village centre.
Elsewhere, snickets I've known have mainly been very short passages between roads or back lanes, and it is the latter that can be followed for some distance in many places I know in Wales, though these are usually wider than snickets and run, like a pedestrian road, and much less intimately, directly between back gardens.
The lines below (retrieved from an old notebook) were I think penned at the time  out of a desire to use the word, but also record memories of visiting Lincolnshire during the last years of my mother's life, and are posted now at a time when traversing such narrow ways would mean breaking the 'social distancing' guidelines if others were using them too. I don't, in fact, recall ever meeting anyone else along these snickets which had the forbidden air of trespass about them, so close they were to private spaces. So perhaps this sense of the forbidden would be further enhanced if I could use them; though even a back lane seems out of the question ..... 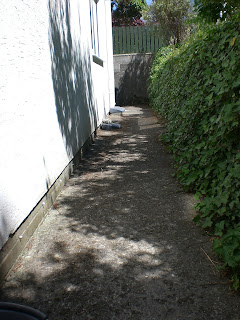 Why go by road when there are other ways?

and behind gardens, sneaking through

where it seems there is no way

but to go round.

You can’t take the car

if you go that way and though it seems

still, you have to show your face as you go.

So no furtive creeping to your inquisitive walking

but a sense of traversing light and shadow

in what’s not an anonymous place, though it is

if you don’t belong there.

Just move on through, and when you get to where