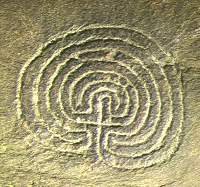 David Jones’ epic poem The Anathémata is structured as a series of circles or parenthetical sections radiating out from a centre encompassing layers of history and prehistory, also forming a circular structure that ends where it begins. His reading of Jackson Knight’s Cumaean Gates provided him with an ancient source for the practice of creating troia or maze patterns in sites such as Troy as magical defences and for the sign-containing properties of such structures. The may-pole is one way of visualising the central space of The Anathémata around which the whole poem turns. It is implied rather than explicit in that poem, which centres on the monologue of The Lady of the Pool, a tutelary deity of sorts. But in reply to a query from Jackson Knight following the publication of The Anathémata in 1952, David Jones wrote that “It has a central theme, a mythos & it circles round that central theme, if it has a ‘plot’ it’s in the sense that the dance around the may-pole plots itself in patterns round the central arbor.”(1)

Such principles are revealed, not only in the grand scale concentric designs of David Jones’ longer works, but also in middle-length poems such as ‘The Tutelar of the Place’ in which the may-pole dance within a labyrinthine defensive structure is more explicit and is symbolically opposed to the square grids of the ‘World Plan’.

‘The Tutelar of the Place’ is set in a Celtic province of the Roman Empire, the may-pole dancers seek “hidden grammar” as part of the rite of the seasonal festival for the Goddess:

Gathering all things in, twining each bruised stem to the swaying trellis of the dance, the dance about the sawn lode-stake on the hill where the hidden stillness is at the core of struggle …

The Goddess or the Tutelar is first evoked as Tellus, the Roman Earth Mother, “of the myriad names” but here “she answers Jac o’ the Tump only if he call Great Jill-of-the-tump-that-bare-me”. Later she is addressed as “Mair”, using the Welsh name of Mary to underline the poet’s sense of continuity between ancient rite and his own catholicism. This takes place in the prayer that follows the dance, and which asks the Goddess to protect the settlement:

…..
mother of particular perfections
queen of otherness
mistress of asymmetry
patroness of things counter, parti, pied, several
protectress of things known and handled
help of things familiar and small
wardress of the secret crevices
of things wrapped and hidden
mediatrix of all the deposits
margravine of the troia
empress of the labyrinth
receive our prayers.

The prayer counterbalances the values of locality and identity against those of centralised uniformity characterised in the image of the Ram:

…
set up the hedges of illusion around some remnant of us, twine the wattles of mist,
white-web a Gwydion-hedge
like fog on the bryniau
against the commissioners
and assessors bearing the writs of the Ram to square the world-floor and number the tribes  and write down the secret things by which we are ….

So the dance enacts this prayer  as it continues:

Sweet Mair devise a mazy-guard
in and out and round about
double-dance defences
countermure and echelon meanders round
the holy mound
fence within the fence
….

The may-pole dance between Jac and Jill - weaving the language of nursery rhyme into elements of folk custom and the ritual fertility dance and setting them with both Latinate and Welsh phraseology woven through the English of the text - creates a sense of tribal locality within the wider globalism of the Roman Empire. But it also employs ancient motifs of the labyrinth as a protective structure enclosing settlements, often involving a virgin goddess or priestesses, which David Jones found in the works of Jackson Knight. The dance, like the prayer, weaves a magical "fence within the fence" around the settlement. But the dance is also the nuptial rite of the Goddess and her consort, guaranteeing the stability of the tribe. So the may-pole dance, the maze, the labyrinth, contain within them the contrary elements both of an open fertility rite, and a closing of the defensive structures symbolised by virginity. David Jones said of The Lady of the Pool in The Anathémata that she is both an Aphrodite and an Athene figure.

The way into the labyrinth is not through an impenetrable gate but through the dance which finds a way when properly enacted.  Of such contraries and inter-connections is the mythos constructed.