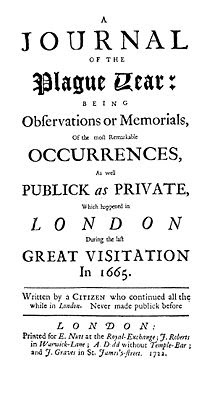 We think of the Plague, or 'Black Death', as something that affected the Middle Ages. But it carried on well into the early-modern era, when they began to take measures to alleviate its spread. Lockdown 17th century style included putting guards outside houses where the infection was present and preventing anyone entering or leaving. Here is part of a contemporary account of the measures taken:

“This shutting up of houses was a method first taken, as I understand, in the plague which happened in 1603, at the coming of King James the First to the crown; and the power of shutting people up in their own houses was granted by Act of Parliament, entitled, 'An Act for the charitable Relief and Ordering of Persons infected with the Plague'; on which Act of Parliament the Lord Mayor and aldermen of the city of London founded the order they made at this time, and which took place the 1st of July 1665, when the numbers infected within the city were but few, the last bill for the ninety-two parishes being but four; and some houses having been shut up in the city, and some people being removed to the pest- house beyond Bunhill Fields, in the way to Islington, - I say, by these means, when there died near one thousand a week in the whole, the number in the city was but twenty-eight, and the city was preserved more healthy in proportion than any other place all the time of the infection.”