Transient Treasures in the Sand 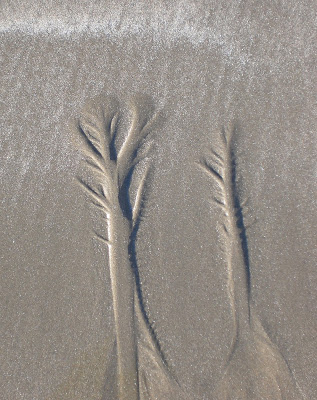 These marks on the beach below the sand dunes at Ynys-Las appeared in serried ranks after the retreating tide.

They are known as 'rill marks'. Water running down through the sand following the retreating tide often leaves marks of this kind, imprinted up the beach away from the tide line and much less noticeable than the ribbed sand marks which can be seen further down the beach. Rill marks often spread out in rough branch-like fashion, but these exquisite patterns, repeated right along this stretch of beach, are some of the most delicate and striking I've seen.

Being on the beach in Winter at low tide when there is no-one else around enables close inspection of such features in the sand otherwise unmarked except for the occasional faint tracks of sandpipers scuttling across it, but those are more apparent further along the beach among the rock pools and the outcrops of peat which are the remains of a long-submerged forest. Here there is just sand and its bareness and unblemished expanse down from the dunes to the sea invites closer inspection of the different textures across the apparently smooth surface.

Such subtle jewels of revelation on a still day are treasured. A storm is coming and after that the beach will be a very different place, with other things to discover.