The Hedge of Mist 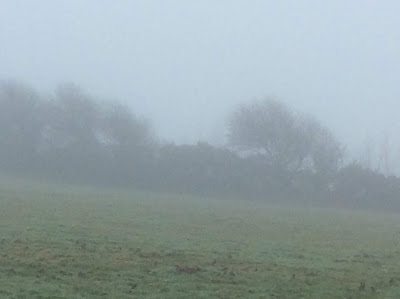 “If you travel on the road below you will never come back,
there is the Hedge of Mist and within it there are enchanted games.”

Who would venture there,
into the Hedge of Mist,
past the severed heads on poles,
through to the empty chair?

And who like Geraint
(rider of long-legged horses,
reddened by the onslaught of eagles,
slayer of giants, victor of Edern fab Nudd)
Would arrive to ensure
that “enchantment be no more”?

(Quotations, direct and indirect, from the story of Geraint fab Erbin included in the Mabinogion collection and verses about Geraint - a warrior from Devon - in The Black Book of Carmarthen.)

The series of englynion in The Black Book of Carmarthen in praise of Geraint Fil' Erbin has been taken as an example from the south-west of Britain (specifically Devon) of the praise of warriors such as those in poems from the north, in particular The Gododdin. That Geraint was a great warrior is also a starting point for the presumably much later story about him in one of the romances in the French style that are included in The Mabinogion collection. Here his prowess in battle and his determination to be, as the Black Book poem has it, “the enemy of affliction/the enemy of oppression”, leads him to right a series of wrongs , first at Arthur’s court, then elsewhere before marrying Enid and returning to his own lands. It is only then, something like half-way through the tale, that his own story is told in what is a quite sophisticated psychological portrait for a medieval tale. Convinced that Enid no longer loves him he takes her on an aimless quest to prove something that even he is unsure of. This is a sort of madness which is only resolved towards the end of the story which culminates in the ‘Hedge of Mist’ episode. He banishes the mist and the magic that underpins it in the final vanquishing of its perpetrator, an act of destruction that could also be taken as a metaphor for the removal of his delusions about Enid.

But what of origins? There is a parallel tale in French from Chretien de Troyes, but called Erec et Enide. The name Erec is thought to derive from Breton Gwerec > Weroc. Enid(e)’s name comes from from ‘Bro Wened’, the original territorial name for the area of Vannes in Brittany as suggested by Rachel Bromwich. The question of origins, influences and borrowings is always difficult with this material but the balance of opinion seems to be that both the French and the Welsh stories have their origin in an older source, possibly from Brittany which had connections across the sea with the Brythonic-speaking peoples of the Cornish peninsula. It is significant that the name of the female character Enid/Enide remains the same in both versions while the male character has a different name in each. Geraint might stem from Gerontius, and so have an historical origin. Enid has been seen as a sovereignty goddess in origin, so it would be appropriate for her name to remain constant while the name of her suitor, the local chieftain or hero, would change with the change of location for the story, whether in time or space.

So Geraint’s reconciliation with Enid can be seen as reflecting the pattern of the tale’s mythological origins in the chieftain’s renewal of his pact with the sovereignty goddess. At the same time the medieval tale can be seen as embodying chivalric conventions about the knight and, as the tale puts it, “the woman he loves the best”, and of her faithfulness to him. But because the tale also contains the literary devices already referred to, any analysis of it as a literary text also needs to recognise these. Going further, I suggest that this presentation of psychological problems within human relationships itself embodies mythic allusions. The final participation of Geraint in the hud a lledrith of the enchanted games when he enters the Hedge of Mist immediately follows his emergence from a psychotic state and his reconciliation with Enid.  The fact that he then brings an end to the enchanted games is a feature of much Arthurian literature where magic is still alive in the world but is being driven out of it. Geraint plays his part as a worthy Arthurian knight in this respect. Thus the tale operates as a mythic (diachronic) structure both in terms of its original mythic pattern and in the working out of its surface narrative. But it also operates as a synchronic structure in that it conforms to the conventions of the Arthurian romances of the early Middle Ages and, indeed, develops these conventions to portray the psychological tensions of human relationships in ways that such tales rarely achieve. The Hedge of Mist covers much that evaporates with the mist itself. Enchantment is elusive; it can be lost and then found, or not recognised at all. What we discover when we look into it, or into a tale of this sort, may depend on what we seek: a remnant myth, a living mythic narrative, a human drama, or simply an old tale about Arthur and his knights.

The tale of Geraint is included in all modern translations of The Mabinogion.

Rachel Bromwich discusses the origins of both Geraint and Enid and the relevance of the sovereignty theme in Trioedd Ynys Prydein (Cardiff, 2006)