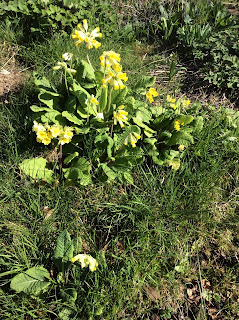 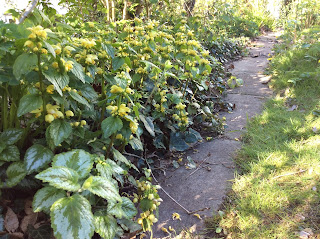 The crescent waxing moon in the west the other night was tinged with red. It was some time after sunset so I didn't expect reflected light from that. Mars was also visible not far off and my star-gazing was done in a magical atmosphere as the sky seemed suffused with a misty light that did not prevent the stars from being seen but put them into soft focus. Orion, which I have marked in the sky through the winter, has now sunk below the horizon, though my star map tells me Betelgeuse should still be visible low on the horizon. Although the Plough will continue to be prominent, pointing to the the North Star, the shorter, lighter nights to come will cause most of the stars to fade into the background even where they are still visible.

Among the things to do in the garden as the weather improves, I have removed the panels from the front of our garage which allow the swallows, when they arrive, to access their usual nesting place in the garage roof space. Unlike the martens who build their nests in the eaves of the main house, swallows like an enclosed space, so we always make sure they can get in by removing the panels which we put back when they have left before the winter.

The cowslips have put on a good show in the wild garden this year and as apple blossom begins to show on the tree Spring seems to be advancing fast in clear bright weather though it remains cold at night. The flowers of Yellow Archangel are also magnificent. Some years there a very few or none at all although the variegated green-white leaves always put on a good show. But every few years, as now, the yellow flowers blossom in profusion. Along with the celandines they turn the garden into a blaze of yellow against the green. Now there are bluebells too and soon they will add their own contribution to the palette.