Edward Thomas and 'The Other'

On the 100th Anniversary of Edward Thomas's death,
it seems worth re-publishing this post from a few years ago: 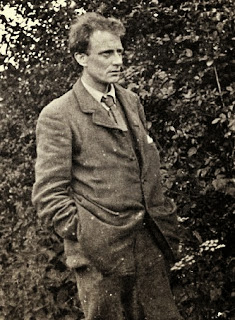 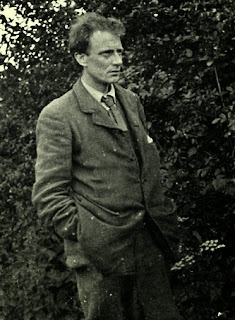 Edward Thomas' poem 'The Other' is often taken by critics as an internal debate between the poet and himself. This, of course, is true in the sense that the poem is a literary production in which that debate is articulated. But I want to consider if we can also take it as enacting a debate with something outside himself. Not that there was another human being going before him or from whom he needed to escape, as the poem's conceit would have it, but in the sense that - apart from the psychotic dimension of split personality - we are all in a relationship with another version of ourself who has an existence in another way of perceiving the world and therefore in another dimension of the world itself.

'The Other' was one of Edward Thomas' earliest poems. His period of life as a practising poet was short, growing out of his career as a writer of prose and cut short by his death in the First World War. The 110 lines of the poem develop the idea that another, looking just like the poet, has preceded him in inns and such places, or that the figure accompanies him on his many long walking expeditions. Set alongside this idea is the perception of two worlds of experience:

Identified at the inn as someone who has been there already, he is fearful:

"I travelled fast, in the hopes I should
Outrun that other. What to do
When caught, I planned not. I pursued
To prove the likeness, and, if true,
To watch until myself I knew."

The 'other man' was introduced by Thomas in an earlier prose work In Pursuit of Spring. The title's 'pursuit' is interesting in suggesting the idea that something elusive is being sought. The 'other' here is someone he keeps catching a glimpse of on his journey until he meets him in a public bar. Though not fully worked out in the prose work, the 'other man' seems to correlate with the 'other thing', that which Thomas is pursuing, but also that which he must escape to find it. Or has the poem has it:

"I sought then in solitude.
The wind had fallen with the night; as still
The roads lay in the ploughland rude,
Dark and naked, on the hill.

Listening to the last sounds of the day fade into night, he is alone:

" ..... I stood serene,
And with a solemn quiet mirth,
An old inhabitant of earth.

Has he escaped 'the Other' or found him and become one with him, in his whole, integrated, self?

But the poem does not end there. Such "moments of everlastingness" are brief. Back in the "tap room din" the other man is asking for him again, accusing him of following in his footsteps:

The poem ends as it began, with the poet stealing out of a wood to the light of an inn and acknowledging that the pursuit will go on until each of them cease to be. Like many of Thomas' poems about paths which lead to inconclusive ends, this does not resolve the matter, but leaves the mystery of it as a pregnant reality. The quest goes on. But what is different here is that it is not the mundane self seeking a deeper significance, but the reverse of this as the one who holds the key to that significance is constantly drawn back to the tap room and the company of one who is content to be there, but is haunted by the other man who knows a different reality.

Labels: Edward Thomas, The Other