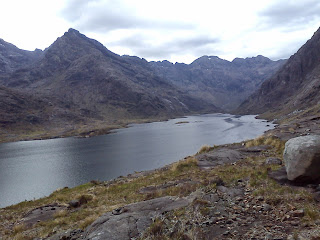 
It’s more than a year since I stood by the waters of Loch Coruisk surrounded by the peaks of the Cuillins, so reading Robert MacFarlane’s The Wild Places where he recounts his own impressions of the lake, enlivened my own memories of that remote basin in the mountains of the Isle of Skye.

I was particularly struck by his perception of the altered sense of time and the provisionality of our assumptions about the passing of time. He says that

“In such a place, your conventional units of chronology … become all but imperceptible, and your individual gestures and impulses … acquired an eerie quickness. The larger impulses of the human world - its wars, civilisations, eras - seem remote. Time in the Basin moves both too fast and too slowly for you to comprehend, and it has no interest in conforming to any human schedule. The Basin keeps wild time.”
This is an interesting variation of the notion of time being suspended or of moments out of time, often reported by others having similar experiences, [e.g. R.S Thomas - HERE]. Rather, he suggests that ‘Wild Time’ doesn’t just slow down so it seems not to be passing at all, as in the usual human experience of a ‘timeless’ moment, but that it also flashes past suddenly, in the “sudden drop of a raven” or “the darts of the damselflies”. This is to experience time as “shades and textures” rather than the ticking away of chronological units .

If 'Wild Time’ is a different way of experiencing time, why should a particular place bring this about? Or if time, in such places, passes differently do we bring our own sense of the long unfolding of time since the Ice Age when the basin was carved out, and as it has remained, balanced against the life span of a midge which lasts a single day? These are imponderables. But my own memory of the place certainly stretches out the time I spent there and at the same time compresses it to a single moment.

You can cross by boat across a bay with small islands on which seals bask to get to the Loch. Those returning the same way are certainly bound by human time in order to catch the scheduled boat back after climbing the rocks and following the path through to the Basin. This was not my schedule. Having spent some time around the Loch our small party climbed to a pass on the other side and then followed a slow descent down an extended valley. The long June day and the late sunset helped alleviate the sense of time needed to get to the nearest road and welcome refreshments. In memory I can capture the experience as a single event. At the time it seemed to go on forever. 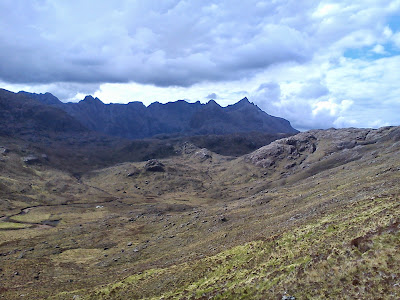 The trail back from the Loch