Ebb and Flow on the Mawddach 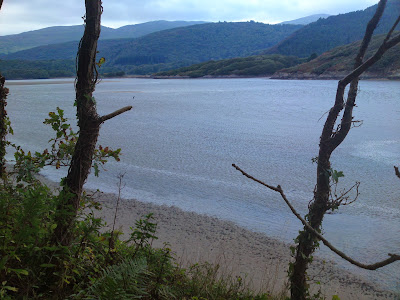 John Ruskin said of the Mawddach Estuary that the only thing more beautiful than the trip between Dolgellau and Barmouth was the trip between Barmouth and Dolgellau. It is not just the panorama of the wooded hills above the wide river, or the distant prospect of the sea beyond the estuary, or even the sheer magnificence of the whole valley at the southern end of Snowdonia. It is contained in the experience I had today - and not for the first time - of the atmospheric intensity of the place.

We walked the path along the river , bending away from it in some stretches through woodland, and caught the first intimations of autumn in the wind's chill and the cloudy skies above the manifold greens of the woodland just taking on a hint of autumn colour. As the wind bent over the slender birches they creaked at the woodland edge as if in anticipation of a winter that cannot be far away.

On the sandbanks exposed by the low tide geese gathered in increasing numbers. Along the creeks in the salt marsh at the river's edge a heron stood staring with tilted neck at one of the rivulets running through the debatable territory between river and woodland as the tides rise and fall. This is a liminal zone in an estuary that changes rapidly. As we walked downriver the waters swirled around extensive sandbanks. But only a few hours later the tide had rushed back in , covering them and changing the view to one of a wide expanse of water. The vigour of the current visibly changed the nature of the river as we walked on and soon engulfed all of the exposed sand. The geese then assembled in large flocks on the salt marsh while the herons - and there seemed to be a different one every half mile or so - stood in the rising waters watching with intent gaze for any movement of prey beneath the flow. Occasionally one would spread wide wings and then flap slowly for a short distance before subjecting another spot to the same intent gaze.

Above the tidal ebb and flow the air currents were also engaged in constant flux. Cloud drifted over and then cleared. For a moment there was rain in the air. Then a patch of intense blue as the sky cleared. On the hillside oaks, ashes, birches hung above the valley, ancient woodlands that have turned from green to russet and shed their leaves for hundreds of years of recent time. Twice daily this estuary shifts with the tides. And its weather reflects this. Today as the last of summer shifted to autumn the edge in the wind was also the edge between seasons and this too was reflected in the shifting edge of the river : a dynamic zone in which the flow of time is caught in the act, not of slipping past unnoticed but still, for a swift perception of transitoriness, isolated in its passing.