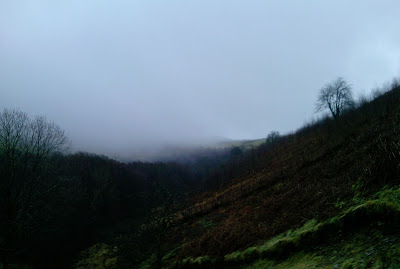 Walking through mist. Cold, damp mist. Like the world is now in the clouds. The view from this ridge walk should have provided spectacular views over the valley of the Dyfi, northwards to Cader Idris at the southern end of Snowdonia and, closer in, over hills and along green valleys. The rain in the morning was supposed to clear. It did stop raining but water vapour continued to hang in the air. The longer views were non-existent, like part of the world had been removed from view. Down the long green valleys and up the grey wall of rock we passed by, white cloud drifted, filling hollows, wreathing trees, clearing briefly to allow a glimpse of the landscape, then re-forming

On one occasion when it cleared the view across to the other side of the valley was of a hillside clothed with bare trees that were covered in so much lichen that it was almost as if they were in leaf. Lichen likes the mist. We took tracks that led through patches of woodland, down muddy lanes and across gorse-covered slopes. But water was the theme even when we were not crossing streams rushing over grey stones, or following the flow of the Dulas river down its lonely valley. Paths were muddy, rain water stood in pools everywhere, the ground was sodden when we crossed fields. After a brief spell of nearly dry weather for a couple of hours in the afternoon the rain returned, slowly and intermittently at first and then more steadily.

And so the day ended. A water day, like many more to come. Water is our element.