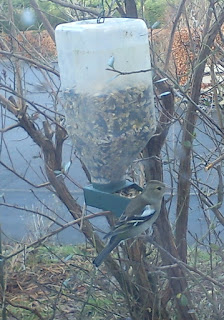 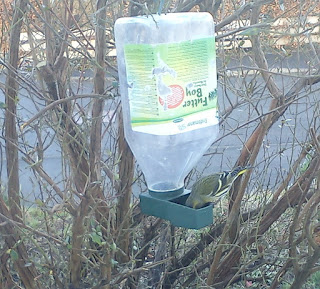 Since we added a couple of extra bird feeders closer to the house than old one we are being treated to close-up views of an array of small birds. These are mostly tits and finches with larger birds sticking to the feeder we have further away in an apple tree. We can now sit at breakfast and watch the constant flurry of coming and going, and observe the behaviours of the different species, like the way the greenfinches aggressively defend their feeding station at the hanging seed hopper, particularly against other greenfinches. Tits seem to prefer to take the seed away, while the finches prefer to feed directly from the hopper.

Putting different food in different hoppers also shows which birds prefer which food. Goldfinches, with their bright red and yellow plumage prefer the niger seeds, while greenfinches and siskins go for the general seed mix and chaffinches seem content to pick up the spilled seed on the floor, mainly caused by the fussiness of some birds who will remove seeds they don't want to get at the ones they prefer.

The closeness of the birds, right up against the window, almost creates the illusion that they share our living space with us. But they are wild animals and, considering this, I am reminded of a phrase from a poem by R.S. Thomas (himself an avid bird watcher) in which he refers to "birds seduced from wildness with bread they are pelted with". So, if we feed them, are we seducing them from wildness? I've noticed that since we have been putting out niger seeds the goldfinches seem less interested in the dried seed heads of the evening primroses which I always delay cutting back until they have had a chance to feed on them.

The counter-argument is that we have taken away so much of their habitat that we should compensate for their lack of wild food. In this view, wanting the birds to remain totally wild is an indulgence neither we nor they can afford. But I think most people feed them because they like to see them. So seduced from wildness for our entertainment? I suppose, ultimately, we cannot separate the argument for responsible concern for the natural world from out own interests as humans who want the world to be a particular way. Especially if the particular way we want it is precluded by our lifestyles. That contradiction may just be part of being a modern human being in the developed world.