Myth and Reality in Greece 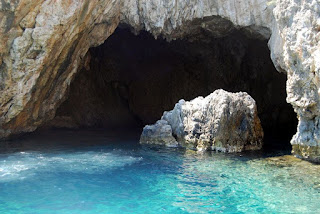 Entrance to a cave in the bay at Paleokastritsa


I've just returned from the Greek island of Corfu, staying in the foothills of the mountain Pantocratos (908m.) which face across a narrow strait from the north-east of the island to the mountains of Albania. Among the reading matter I took with me was Prospero's Cell, Laurence Durrell's impressionistic memoir of the island in the 1930's. The title of the book comes from a theory of one of it's Greek characters that Corfu is the location of Shakespeare's play The Tempest. The theory is partly based on the suggestion that the Greek name of the island - Κερκυρα - (transliterated by Durrell as 'Corcyra'), could be construed as an anagram of Sycorax, the witch who inhabited Prospero's island before he arrived. Durrell's own reflections on the literary connections of Corfu include the identification of the bay where Odysseus is washed up an found by Nausicaä. He suggests three possible locations and opts for Paleokastritsa as the most likely with his own careful blend of fine-writing and factual accuracy:


"… drenched in the silver of olives on the north-western coast. The little bay lies in a trance, drugged with its own extraordinary perfection - a conspiracy of light, air, blue sea and cypresses. [ …..] For the benefit of the more recondite, or for the mere specialist, one must record the existence of a great cave in the point immediately before the beach marked Hermones on the maps."


Durrell asserts that the best way to understand the character of Odysseus is to get to know modern Greeks who still display the ancient hero's temperament of a refusal to see things as they are : to live the 'myth' rather than the 'reality'. What, I wonder, would Durrell have made of the Greeks sitting along the low wall outside the Government offices below a banner demanding "pay us our wages and our pensions"? What does Athena whisper in their ears as British and German tourists saunter past their banner on the way between the town and the beach to spend euros in the bars and tavernas?

That anagram of 'Kerkyra' (as I think it should be transliterated) doesn't quite work. It's author, though a real person, is a fabulist for whom the imaginative construction of reality is superior to the tyranny of fact. Durrell knows this, but his memoir itself has the air of a construction, a narrative based on a willed view of the island, though also one based firmly on his experiences of living there.

Shakespeare may have known of the island. Contemporary traders certainly did, and its strategic location where the Adriatic joins the Ionian Sea meant that it was appropriated by Venice, and later by both the French and the British. It is the reality of this strategic location that sent Durrell himself scurrying for safety after the outbreak of the Second World War, initially to Crete and then to Alexandria.

Today it appears that most Greeks want to stay in the Eurozone. They also want to be paid "our wages and our pensions". Their face off against the fact-men of the northern European economies looks like it stands little chance of success. Like Odysseus they appear to be heading for certain disaster. It will be interesting to see whether it will be the 'myth' or the 'reality' that prevails.