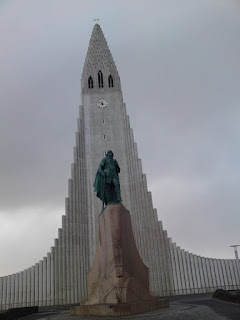 
A cold day in Reykjavik. Being further west as well as further north, but in the same time zone as Britain, the mornings are darker and it’s still grey and dim when we set out after breakfast. In parts of the city, thermal spring water provides under-pavement heating to keep them free of ice. But down by the harbour and the new concert hall with its multiplicity of glass panes of different shapes and sizes - like mirrors of ice, some reflecting different colours - the walking is difficult on slippery surfaces. Later up on the hill by the basalt cathedral (Hallgrímskirkja) it is still necessary to step carefully. Inside the cathedral, the sparse decorations and the open space above give an impression of pointed arches and an austere but also gothic-like feel. The bright chrome pipes of the organ protrude dramatically out of the walls adding to the starkness of this very plain yet striking place of worship.

A lift takes us to the top of the steeple and a viewing platform to look down at the layout of the city. Further off the dome of ‘The Pearl’ provides another viewing point from above the ring of huge insulated tanks from which hot water from thermal springs is pumped around the city and beyond to heat houses and other buildings.

Outside I pose for a photograph in front of the statue of Leifur Eiríksson looking west across the Atlantic to the America that he reputedly visited from Greenland long before its ‘discovery’ by Christopher Columbus. Opposite we take coffee at the Café Loki with a panoramic view of the Cathedral through its upper floor windows. I thought this ironic. But the street plan of Reykjavik is a compendium of norse mythology and story. Odinn, Thor, Frey, Freyja, Baldur and others all have their streets, roads and gates. As do Njáll, Grettir and numerous other characters from the sagas. Although it seems that an early christian bishop, Jón Árason, did away with the names of the days of the week still used in English, the gods have claimed the streets instead!

Most of the manuscripts of the sagas are held in the Árni Magnússon Institute on the university campus. But it is closed on the day we are in Reykjavik. Disappointment is partially alleviated by the fact that a special manuscript exhibition is being held at the Culture Museum. Many of the manuscripts had been kept for centuries in farmhouses until Árni Magnússon sought them out and took them initially to Denmark. A vellum page of one of them is peppered with holes so it could be used to sift flour. Strange how notions of value change with changing times and then change back again. While it is the larger, illustrated early vellum pages that attract attention as exhibits, I was also struck by a later paper book of Njáls Saga painstakingly written in small script.

As darkness falls on Reykjavik our thoughts turn to a journey out to the Snæfellsnes Peninsula for the next few days of our visit to Iceland.