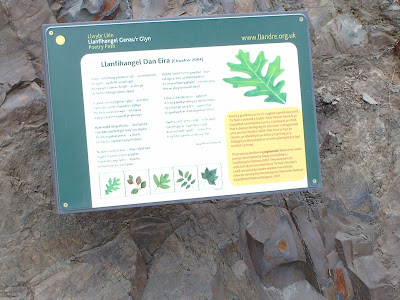 The village where I live in West Wales – Llanfihangel Genau’r Glyn (Llandre) -has a number of themed paths through a wooded hillside behind the church. The local Heritage Society has just added a Poetry Path to this network. The idea is that poems by people from the area, as well as poems about the area, are displayed on plaques that are themselves mounted on wooden cradles set at key points along the path. Most of the poems are in Welsh but some are in English, reflecting the linguistic balance of the area, past and present. The first poem to be encountered on the path is an extract from Huw Meirion Edward’s Tir Neb, which won the Chair at the National Eisteddfod in 2004 for a long poem in traditional metres using cynghanedd. This part of the extract evokes a February morning in the village:

(To our cold beds in Genau’r Glyn - in its turn
Deep into the valley came the hour of awakening
A small month, impossibly white - as manna
Inviting us to a celebration of snow, gleaming bright) 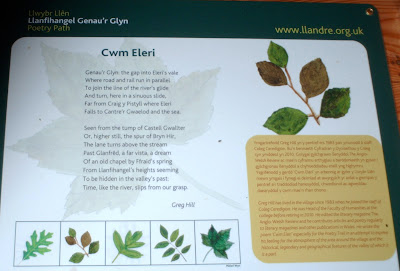 My own contribution to the path follows and was written especially for it. It is an attempt to express my feeling for the atmosphere of the area around the village and the historical, legendary and geographical features of the valley of which it is a part. It refers both to the general topography and specifically to features such as the site of a medieval motte and bailey castle as well as associations with Brigid (Ffraid) further along the valley of the Leri (Eleri) and also the ‘lost land’ of Cantre’r Gwaelod under the sea near the river’s estuary on the nearby coast. Here is the poem:

Genau’r Glyn: the gap into Eleri’s vale
Where road and rail run in parallel
To join the line of the river’s glide
And turn, here in a sinuous slide,
Far from Craig y Pistyll where Eleri
Falls to Cantre’r Gwaelod and the sea.

Seen from the tump of Castell Gwallter
Or, higher still, the spur of Bryn Hir,
The lane turns above the stream
Past Glanfrêd, a far vista, a dream
Of an old chapel by Ffraid’s spring
From Llanfihangel’s heights seeming
To be hidden in the valley’s past:
Time, like the river, slips from our grasp. 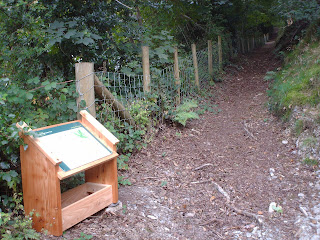