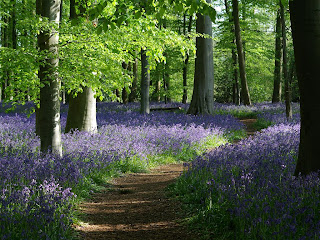 Bluebells after rain - have you ever tasted that experience? In a greening woodland where the floor is a thick carpet of blue is a place to be at this time of year. It's like you've stumbled across some archetype of the nascent summer emerging from Spring. Something which defines a particular moment in the year in all its enchanting sensuousness. And then rain ... clearing to sunshine. At that moment while the wood is still wet, then is the time to step inside and be touched by something that you never quite register as a reproducable experience, that you can never quite define. It has a hint of faerie about it, liminal as if touching another realm through a border that is porous but, still, cannot be crossed. So although this 'other' world is here all about you, a verifiable part of the natural world, it remains 'other'. Is this the reason for the folklore tradition that anyone who wanders into a ring of bluebells will fall under fairy enchantment?
That is one way of writing about bluebells. Another is to explore their nomenclature. Many books still give the botanical name as Endymion non-scriptus which already opens up a treasure house of allusion. Endymion in Greek myth was beloved of the Moon goddess Selene who ensured that he could remain in his state of youthful beauty providing he remained asleep.

The part of the scientific name ‘non-scripta’ means ‘not written [upon]', and distinguishes this species from the ancestor of cultivated hyacinths (Hyacinthus orientalis) which in Greek mythology grew from the blood of Hyacinthus as he died. The God Apollo wrote ‘AI AI’, which means ‘alas’ on the petals of this flower as a lament. These marks are supposed to appear on several different species which might refer to the flower in question, but it is the bluebell that has it enshrined in its botanical name. Here is Ovid:


As God Apollo spoke his prophecies,
The blood that filled the grasses at his feet
Turned to brighter dye than Tyrian purple.
And from its lips there came a lily flower.
And yet, unlike the silver-white of lilies,
Its colour was a tinted, pinkish blue.
Nor was this miracle enough for Phoebus;
He wrote the words 'Ai, Ai' across its petals,
The sign of his own grief, his signature.