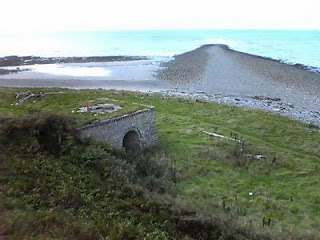 The sibilance of the sea on the stones carries whispered messages from drowned acres out of our own time, cut off from us by memory as much as the sea. Who can hear the voices in the hiss of the foam around jagged rocks?

The sudden yellow of the horned poppy amongst grey pebbles startles, jolts a sharp recall which ebbs as the wave that crashes on the beach retreats.

Above the beach, the arched stone structure of a long-disused lime kiln from a hundred years back is like something from a far remoter past. They would land rock here, burn it for lime for acidic soils. Now the openings are stuffed with beer cans and other detritus clogging the passages into its mysterious interior.

If this is too far back to remember, what of the causeway running out into the sea? Named after a local saint from the sixth century but far older than this, each nomination accuses another and becomes dative, frames of time receding through recession after recession. Imagined as a road leading out to the legendary drowned land of Cantre'r Gwaelod, it runs to a rock called Caer Wyddno, seat of the legendary king of that land. But the waves lapping the causeway run along the detritus of a glacier too far back for tales to be told but something that can be read in the rocks, the upturned layers of mudstone oblique to the rippled level of the sea.

Into which the morraine runs, holding its secrets down where embedded stones grip the shifting sands. At low tide you can walk out here as along a submerged pier and appear to be walking on water; imagine drowned lands or recite images of ancient glaciers before this land was our land and think on when the pulse of the tides throbbed over what's now under or when the fissured cliffs will hear not the sound of the wind and the crash of the waves, but mantras of supra and infra deep in the abyss of the future.