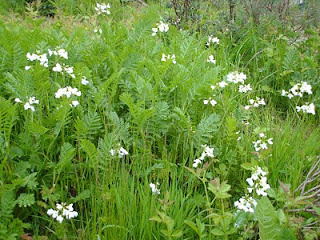 Cardamine pratensis (Lady's Smock) flowers
growing between the leaves of Tansy in my garden.
*
When daisies pied and violets blue
And lady-smocks all silver-white
And cuckoo-buds of yellow hue
Do paint the meadows with delight,
The cuckoo then on every tree
Mocks married men, for thus sings he:
‘Cuckoo, cuckoo’ – O word of fear
Unpleasing to a married ear!
So wrote Shakespeare at the end of Love’s Labours Lost, in his verses for the Spring. I always associate Lady’s Smock with the month of May and this year seems especially to favour them as they are everywhere in abundance. Other common names for the plant are ‘Cuckoo Flower’, ‘May Blobs’ and ‘Milkmaids’. Shakespeare’s verse suggests associations with amorous activities as part of the May festivities and the Old English name ‘lustmoce’ may reflect this. Shakespeare obviously knew much lore about this plant and its associations, although the words of the verse seem to suggest a reading of Gerard’s Herball (published just a year before the play was written) which also describes them as white, the colour of the bleached smocks of milkmaids, while the flower itself is more often somewhere between pale lilac and pink in colour.

Here is another verse from the same period as Shakespeare from Irish, given by Kenneth Jackson:


Tender cress and cuckoo flower:
And curly-haired, fair-headed maids,
Sweet was the sound of their singing.


Sweet indeed are Lady-Smocks in May.