Poetry and the Visual 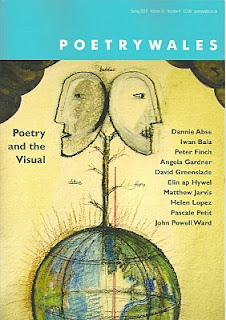 The current issue of Poetry Wales magazine is a special ‘Poetry and the Visual’ edition. My contribution ‘Tide’ is jostled by an array of concrete, visual and conceptual poems. The magazine’s editor, Zoë Skoulding, comments that “all language takes on a visual shape …..the emphasis here might be what happens when we start to look at the poem rather than through it.” The magazine also contains some featured essays on links between poetry and the visual arts and the way words can interact with images. The artist Iwan Bala, who likes to place text in his visual constructions, observes that this questions the notion of the transparency of the visual image: “Having words in there adds layers, particularly if those words are used in Welsh, and therefore probably hermetic to a majority of viewers. They become marks, scribbles – a secret language.”
This is similar to a point which was also made by the poet and artist David Jones whose painted lettering used the words of different languages to make visual presentations that also contained written texts (see the example in the sidebar). Often, however, the ‘message’ moves between different languages, most typically English, Welsh and Latin but might also contain words from other languages  such as Old English, Greek or German. He did something similar in his poetry, placing words from Welsh and Latin in his English texts. I discussed this in a previous blog  HERE .  It could be objected that those who cannot read these languages are excluded from full appreciation of the work, and this objection extends to the density of cultural references which he employs.
To some extent this must be true, and to that extent the only adequate response is that these are things that you’d better know. David Jones wrote: “The grey wolf, Fenris, that sits on the ‘throne of heaven’ in Northern myth is just about as meaningless to people today as Rhiannon or Ceridwen or the Twrch Trwyth or Olwen the daughter of Ysbaddaden Pencawr. When I write these names in my work I try to make them come naturally … but I realise that they mean virtually nothing to the reader.   […..] It gets difficult if people don’t know what Aphrodite, let alone Rhiannon, signifies.” His answer was that all we can do as artists is ‘show forth’ what seems real to us.
Zoë Skoulding’s editorial speaks of  “what is created anew in the encounter between different signifying systems”. The question of signification is, I think, crucial here. But Iwan Bala’s point also has some force. The effect of the placing of words in Welsh can be that, simply by being in Welsh, they can be significant (be a ‘sign’). He says these things are “metaphors for a culture. My culture.” He does not follow David Jones in making inscriptions that mimic calligraphy and establish themselves as if carved in stone but deliberately creates works that are written on like “graffiti … in danger of being washed away at any time”. Fragility, therefore, is built in to the pattern of significance in presenting his culture.