The Genius of Coleridge 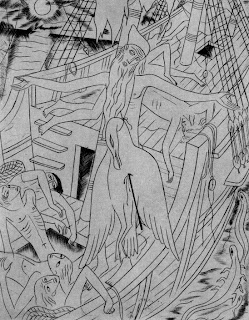 David Jones
illustration to 'The Ancient Mariner'
The entry which I’ve currently posted for the changing extracts above from Dorothy Wordsworth’s Journal contains a couple of phrases which are likely to have been picked up from reading the manuscript of ‘Christabel’, which Coleridge had brought for the Wordsworths to read (She records on the 23rd March 1798: “Coleridge brought his ballad finished”.)  In a couple of years Coleridge wrote ‘The Ancient Mariner’, ‘Christabel’, ‘Kubla Khan’ (the latter two published some time later) along with several other gems of Romantic sensibility.  Wordsworth wrote ‘Lines Composed Above Tintern Abbey’ with it’s article of faith : “Nature never did betray the heart that loved her” and addressed his “dear sister” as a fellow worshipper of Nature. Meanwhile she chronicled their daily activities in her Journal. The first edition of Lyrical Ballads was published later that year with many of the poems having been written in the months leading up to publication.

But it is the vision of Coleridge that I want to discuss here.  He has been characterised as a "damaged archangel", mainly on the basis of events in his later life. But in the closing years of the eighteenth century he and Wordsworth were young poets with a mission to change the face of poetry for ever. They were successful. But they were in fact very different poets. Some of Coleridge's 'conversation poems' may be nearer to Wordsworth's desire to write in the "real language of men" ('Frost at Midnight' being an evocative example) but the visionary qualities of Coleridge's longer poems and the metrical experiments, in particular in 'Christabel', mark him out not, as with Wordsworth, as an innovator in poetic diction but as one who developed metrical practices of the sort that Hopkins, nearly a century later, still felt were necessary to reform English prosody. The following lines from 'Christabel' are often cited:

The one last leaf, the last of its clan
That dances as often as dance it can


Coleridge's preface to the poem outlines a 'new principle' of composition, "namely that of counting in each line the accents not the syllables", and the addition of extra syllables to introduce "some transition in the nature of the imagery or passion".

Consider the pyrotechnics of these lines:

In the touch of this bosom there worketh a spell
Which is lord of thy utterance, Christabel!
Thou knowest tonight, and will know tomorrow
This mark of my shame, this seal of my sorrow;
But vainly thou warrest
For this is alone in
Thy power to declare
That in the dim forest
Thou heard'st a low moaning
And found'st a bright lady, surpassingly fair;
And did'st bring her home with thee in love and in charity,
To shield her and shelter her from the damp air.

Those lines are imprinted on my memory, like my name and my mother's name; I carry them around with me as part of my psychic baggage. They never cease to haunt me. By the standards of classical verse of the eighteenth century the rhythm is all over the place. The accents beat out the pulse of the verse while the 'extra syllables' weave a magic spell like no other. This is, in fact, not so much new as a recognition of the natural rhythms of English going back to alliterative verse. But it was certainly 'new' at the time, though others who were shown it - e.g. Walter Scott  and Byron -  imitated it even before Coleridge brought himself to publish it. It has my vote as one of the essential poems in the English language.