Geese on the Mawddach 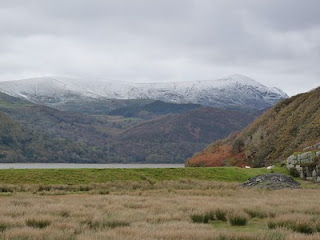 There were eight or nine of them honking in the way geese do and they turned, as one, then glided down onto the sandbank in the middle of the river and settled there. Watching them, and the water swirling around the bank, I attuned myself to the flow below the slopes of the hills in muted February shades of russet, yellow-green and brown. Above, the grey rock was streaked with remnant snow. My attention was drawn back to the river as a heron moved across my field of vision following the flow downstream to the estuary, beating the air slowly with heavy wings. Meanwhile the geese spread out across the bank which had been exposed by the retreating tide.

A light shower of fine rain passed and was gone in minutes. Cloud drifted low in the sky with barely a gap for the weak sunshine to filter through. The white bark of some birch trees, fissured with black incisions, caught the light and I stared at the trees intently as a sequence of sharp sense impressions, each distinct, clear, and bright, though simultaneously forming a blur of consciousness, filled the day with visionary perceptions of such subtlety that they seemed almost ordinary.

The geese remained on the sandbank which was growing as the water level fell. There were some oyster-catchers there too by now. Time passed yet did not pass. Still, un-moving as a heron, I watched from my vantage point above the shore as the river ran down to the sea.