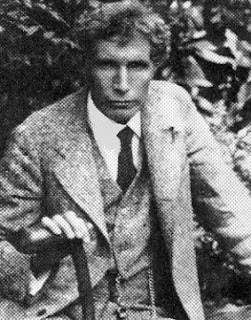 So said John Cowper Powys in his Autobiography – surely one of the most extraordinary autobiographies ever written. The idea that everyone has a ‘life-illusion’ is not an uncommon idea, but only Powys, I think, took this to such self-conscious extremes that he made its realisation his personal life quest as well as embodying it in the characters of his novels.

But is the statement above true? Can we really have a life that is completely independent of the society in which we live? There are various ways of approaching this question. If we take it as a version of the nature –v- nurture argument we may well conclude that, certainly, the personality, sexuality and other aspects of a particular individual may challenge, or be challenged by, the conventions of some historical/social contexts more than others. So it might be a matter of luck for particular individuals, with particular predilections, to be born into one society or historical period rather than another. But, if they then find themselves outside the ‘mainstream’ it is, at least in reasonably tolerant societies, possible to become part of sub-cultural communities without ceasing to be part of 'mainstream' social life.

I think Powys had something rather different in mind. His ‘life-cult’ was a peculiarly individual thing that wouldn’t necessarily be shared with anyone else. In some ways it is like a secret life that is lived alongside the public life and completely independent of it. Like solipsism, this is an attractive proposition but one which is difficult to maintain (a difficulty which did not defeat J C Powys it must be said). There is no recourse here to psychological theories which suggest a shadow self or unconscious mind operating beneath the everyday conscious self. Powys’s secret life is a fully conscious affair, lived to the full, and mediating the outer life rather than operating at one remove from it.

That most of us have such a life is not in question. But the elevation of that life to a fully-conscious and deliberate ‘life-cult’ to be lived out regardless of public approval or disapproval and, indeed, not in any way dependent on social processes or even any other individual, is a remarkable assertion of individual human potential, characterized by Powys elsewhere as a ‘magical quest.

I will leave readers of this blog with the following further quote from the Autobiography:


“To believe nothing, to be a Pyrrhonian sceptic down to the very bottom of your nature, and yet to put into practice – if not actually to feel – many of the most subtle emotions which have been from time to time immemorially linked up with the idea of a saint, does not that strike your mind, reader, not only something for which irony, with all its nuances, is only a rough-and-tumble synonym, but something which a real step forward in that planetary casuistry with the difficulties of which all higher intelligences are forever struggling?”