Musings on Comus and Midwinter 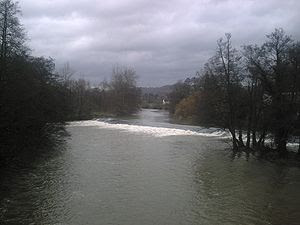 The River Teme at Ludlow

In 1634 the young poet John Milton – long before he had conceived of Paradise Lost – was commissioned to write a masque to be performed at Ludlow Castle to celebrate The Earl of Bridgewater’s appointment as ‘Lord President of the Council of Wales’. Ludlow is in England, the seat of power over what happened in Wales. Milton himself was to become very familiar with the politics of power. Following the execution of Charles I he became secretary to Cromwell’s Council and was required to produce tracts justifying the establishment and maintenance of the commonwealth. But in 1634 he was still young and, presumably, ambitious. His masque is watched over by Sabrina, the Goddess of the River Severn and, featuring as it does the Earl’s daughter, dealt with themes of desire and chastity. Severn (Hafren) flows into England out of the mountains of Central Wales and is already a great river when it loops around Ludlow on its long journey to the sea. Sabrina is addressed:

Under the glassy, cool, translucent wave,

In twisted braids of lilies knitting

The loose train of thy amber-dropping hair

She presides over the events of the masque which itself looks back to age that was passing. If Comus himself was a dry run for Satan in Paradise Lost, that poem was a regicide and a revolution away. Comus is defeated; the dark and twisted woods, for all their menace, seem like an innocent Eden in retrospect. And these border areas still today have an Edenic quality about them. Ludlow is a place that often feels like it could still be in that past, wandering around the ruins of its castle or standing watching the River Teme (another river out of Wales  which eventually joins the Severn) rushing over its weir, its old inns and – even when busy – its tranquil atmosphere.

Re-visting the poem in his Scenes From Comus, the modern poet Geoffrey Hill evokes this atmosphere effectively. Although he writes very much from a sense of “…a fabled England, vivid / in winter bareness” there is also very much a sense of where this ends “half way across a field, / the valley of the Honddu at the cleft / church of Cwm Yoy”. Two world meet here, or rather merge imperceptibly into each other. It is border country in more than name. In his poem sequence, Hill mutates the Michaelmas setting of Comus to Midwinter: Milton’s “in Wintry solstice like the shorten’d light” opens his final poem and provides a culmination for these meditations on light in darkness. At the same time it recalls Milton’s sonnet “When I consider how my light is spent” reflecting on his increasing blindness and the imagery of darkness in Paradise Lost.

As we move into the darkest part of the year, towards a border that we cross in the course of the Longest Night, I find that this border country is imaginatively present to me: the mistletoe country centred on Tenbury Wells just south of Ludlow. Beyond the Longest Night, another early Milton poem marks the season. The writer and artist David Jones related how his father always read aloud  ‘On the Morning of Christ’s Nativity’ on the 25th December before breakfast. Why is it that the most memorable lines of that poem for me refer to something that is introduced only to be dismissed:

Fly after the night steeds, leaving their moon-loved maze.

Blake said that Milton was of the Devil’s party without knowing it. Have I followed the winding loop of Sabrina’s river through a borderland only to come to this conclusion – about Milton… or myself? The Severn returns to Wales and becomes its southern coast in its estuary. And so I turn back upon myself, and the darkness. But, I trust, not “without all hope of day”.