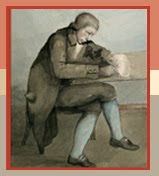 Iolo Morganwg is often credited with single-handedly creating many of the institutions of Welsh culture, in particular the ceremonies of the Gorsedd of Bards and the ethos of the National Eisteddfod. At least some of the sources he cited to support the results of his antiquarian research were genuine, but where there were gaps he filled them with convincing inventions based on what his intuition told him ought to be there. For many years after his death in 1826 he was regarded by some as a valuable remembrancer of lost cultural artefacts (though others had their doubts even then), but the more stringent scholarly atmosphere of the twentieth century unmasked him as a forger on a spectacular scale.


Many have been troubled by the lack of consistency of a man who was both a champion of ‘the truth against the world’, a rationalist in religion and politics, yet a romantic dreamer in his creation of celticism and revived bardic lore. But why expect consistency? As a cultural historian he has been found wanting – or, rather, found out. But it seems that we are now at sufficient historical remove from his times to begin to regard him as a part of the history that he dealt in. He can now be set in his own context as a contributor to a process of cultural reclamation rather than a lone fantasist imagining the return of the Druids. He was, after all, as Prys Morgan points out, as much the heir as the creator of the revival of interest in Welsh antiquity.


His own very real achievements both in antiquarian research and in original creation were many. The initial credibility of his forgeries of Dafydd ap Gwilym and other early poets indicates that he was, himself, not only well-read in the style and techniques of strict-metre poetry but also a talented poet in his own right. Ceri Lewis suggests that his productions – whether forged or not – are “among the most splendid creations of the Welsh muse in the eighteenth century”. Lewis relates the development of the urge to forge from early impulses to ‘polish’ or complete early poems that he had collected. Later his wish to promote theories of bardic lore and the virtues of his native Glamorgan led him to invent examples that he thought ‘ought’ to be extant to illustrate his arguments.


His relationships with Owain Myfyr (who financed the publication of The Myvyrian Archaiology of Wales), with William Owen Pughe (his unwitting associate) and with Edward ‘Celtic’ Davies (his rival) all indicate a man who was both infuriating to work with and ungrateful to those who helped him. But the fact that each of these men at points of strain had doubts about the authenticity of the early material that Iolo had ‘discovered’ only points to the fact that, when he was telling them what they wanted to hear, they were only too ready to put the doubts on one side and were therefore to some extent complicit in his deceptions.


If the very multiplicity (not to mention duplicity) of his dubious activities are seen as a distraction from the recognition of his own considerable talents as a poet, he is now being rediscovered as a free metre poet in his own right. By the time he had composed the first drafts of his Cyfrinach Beirdd Ynys Prydain while in a debtors’ prison in Cardiff, in spite of representing himself simply as ‘a journeyman mason’, he also wished to be regarded as an accomplished poet. Whiling away the time in that debtors prison, Iolo had turned his thoughts to a poet called Edward Dafydd, who had lived a hundred years earlier. Then he went on to place the real poet in a fictional eisteddfod of 1681 at which a metrical system called the ‘Dosbarth Morgannwg’ was codified. He claimed this had been in existence before the 24 ‘Cerdd Dafod’ metres codified by Dafydd Edmwnd in 1453. Iolo’s ‘cyfrinach’ (mystery) was a metrical system that included accentual as well as syllabic methods of composition. Such ‘free metres’ accorded with his own practice as a poet when he was not imitating strict metre verse.


Iolo’s extended stay in in the 1790s was intended to promote a collection of English poems and establish his reputation as the ‘Bard of Liberty’.  Poems Lyric and Pastoral (1794) reflect new influences during his time in . Many of the poems were revised from earlier drafts, and not always to the good, while he awaited publication in . It seems that even his own original compositions suffered from the ‘improving’ instinct. During this period of his life Iolo rubbed shoulders with many of the emerging literary and political figures of the time. He certainly knew Coleridge and it is likely that he was at least known to Worsdsworth.


Iolo Morganwg’s labyrinth of other interests (and they ranged from agricultural theory to architecture) is exhaustively covered in the 500 pages of A Rattleskull Genius : The Many Faces of Iolo Morganwg  edited by Geraint H. Jenkins  University of Wales Press  (2005) on which the above comments are based. The book is part of a series on his life and work which reflects the desire to re-claim Iolo as a national treasure. And why not?