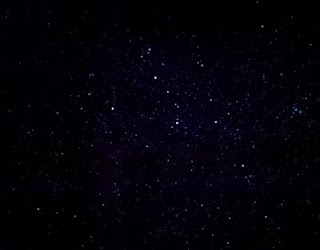 Our local council, along with many others, recently decided on grounds both of cutting costs and lowering its ‘carbon footprint’, to turn off street lighting out of the towns and larger villages after midnight. This came into effect this month. Where I live, on the edge of a village with fields behind the house, we only have a few low-level lights along the lane down to the main road through the village. But the sodium lights along that road  throw up an orange glare into the sky which means that only brighter stars are visible.

Last night, the sky was open with no cloud. I went outside after the lights had switched off. It was dark except for the starlight. A late moon was rising over the hill behind the house but at just past the last quarter so not particularly bright and was not in the part of the sky I could see. In the north the Plough hung low in the sky like a huge question mark lying on its side and pointing to the Pole Star. Nearby Arcturus gleamed dully red. Directly above, Cassiopeia’s Chair shone a bright silver against the background of the Milky Way streaking the sable sky with white. As the winter stars gather and Orion rises in the south, these clear nights after midnight will be a delight. These are jewels of great value costing nothing except the inconvenience of a dark street when returning home late on a moonless night. A price I will gladly pay for a cosmos of light.