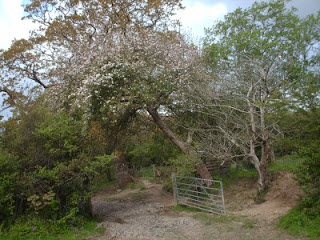 So begins the poem 'Mewn Dau Gae' ('In Two Fields') by Waldo Williams, one of the great mystical poems of the twentieth century. From where, he asks, did the sea of light roll  across the two fields 'Weun Parc y Blawd' and 'Parc y Blawd'? The poem continues for fourty-eight lines of exploratory response to that question, culminating in images of 'the outlaw', the hunter', 'the exiled king' claiming back his territory as he parts the rushes. The poem recalls an experience the poet had in the gap between the two named fields which I visited recently (see photo above). One field is level and comparatively dry, the other (as the word 'weun' suggests) is wet and uneven with rushes growing in it as well as grasses.

Here are some lines I wrote in my notebook - necessarily in Welsh although it is not my first language:

Paraphrased poorly in English this means:' Exploring borders between two worlds/One hidden as the flower meadows/Waldo brought together in his verse/Another world which remains this world.'  The landscape of Pembrokeshire is particularly resonant with other-world images in Welsh literature back to Y Mabinogi. And Waldo's poems, while not referring back specifically to these examples, are particularly suggestive of mystical dimensions to common features of the living landscape. Rowan Williams has discussed the difficulties of translating the final lines of 'In Two Fields':

'No man's land' is a risky gloss; it has something to do with the 'bwlch' of the original, since this is most prosaically the gap between territories, but also brings in some sense of 'standing in the breach'.

The 'gap' between the fields is a gap between worlds. Metaphorically, perhaps, but I think in some sort of literal sense too for the poet. The Other World from which the 'outlaw' returns seeking to claim his territory in our world is set here in a Christian context, but mysticism transcends religious denominations and even religion itself. The vision here is deeply infused with the natural landscape, with the poet's own inner landscape of ideal community (he imagines the empty fields "full of folk") and have been received, culturally, very much in the spirit of wishing to reinforce that ideal of landscape and community.  The 'outlaw' is a 'hunter' who "throws his net around us". This image, and the image of the 'sea of light' set against the darkness, together with other images in the poem, have direct correlations in early Quaker writings that the poet must have been reading prior to his formally becoming a member of the Society of Friends in 1953. But the poem reveals an experience that predates its writing by many years, an experience that  seems to have been triggered by the place itself. At one point a tree in the hedge is imagined as a fountain breaking towards Heaven

(And falling back their droplets like the leaves of a tree)

The image here is,of course, from the Book of Revelation: 'the leaves of the tree for the healing of nations'. Heaven, as Waldo Williams made clear elsewhere in his writings, is another world; but one with which our own world might interact. 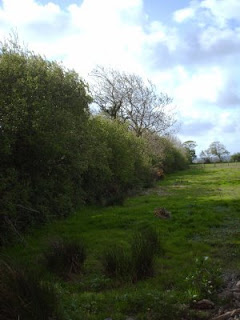 The hedge between the two fields