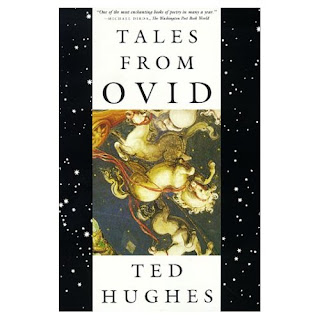 Ask anyone what they think was the most significant work published by Ted Hughes at the end of his life and the answer will probably be Birthday Letters, poems detailing his response to the suicide of his wife Sylvia Plath but held back until just before his death in 1998. But ask me and I’d say his Tales From Ovid published in 1997. The blurb on the back of my copy, which I’ve recently been re-reading, claims that “it is as if Latin and English poet were somehow the same person”. My Latin isn’t good enough to fully judge the accuracy of that judgement of the quality of the translations, as literal translations, but they certainly present Ovid’s stories in a fluent, pithy and highly readable form. They work perfectly as verse, as narratives and as versions of these tales from the Ancient World recycled by Ovid in the Rome of Augustus and recycled since by, among others, Chaucer and Shakespeare. Given the importance of Ovid to Shakespeare and the importance of Shakespeare to Hughes (see his Shakespeare and the Goddess of Complete Being) it is appropriate that he should have tackled this final task and given us his own versions at the end of his life.

The American classicist Bernard Knox has questioned the precise accuracy of these translations but it could be argued that Hughes did what Ovid himself did, picking up, as Hughes puts it in his introduction, “the current of human passion … where it combusts and levitates, or mutates into an experience of the supernatural”. This enactment of metamorphoses, the transference of human experience from one plane to another, as much as the bodily transformation that represents this in the tales, is captured superbly by Hughes. In the range of stories from the amusing to the horrific, Hughes’ language remains pliable and direct with no sense of artifice or of the language getting in the way of the experience which is all too common in translations. Just listen to this on human frailty and passion:

Like a great tree that sways,
All but cut through by the axe,
Uncertain which way to fall,
Waiting for the axe’s deciding blow,
Myrrha,
Bewildered by the opposite onslaughts
Of her lust and her conscience,
Swayed and waited to fall.
Either way, she saw only death.
Her lust, consummated, had to be death;
Denied, had to be death.

(Myrrha, who desires only her own father)

Or this on the metamorphic process:

No weapon was to hand – only water.

So she scooped up a handful and dashed it
Into his astonished eyes, as she shouted:
‘Now if you can, tell how you saw me naked.’

That was all she said, but as she said it
Out of his forehead burst a rack of antlers.
His neck lengthened, narrowed, and his ears

Folded to whiskery points, his hands were hooves,
His arms long slender legs. His hunter’s tunic
Slid from his dappled hide. With all this

The goddess
Poured a shocking stream of panic terror
Through his heart like blood.

If Hughes sometimes uses vocabulary that is peculiarily modern, it is deployed to magnificent effect. Here finally, is Apollo:

In his left hand the lyre
Was a model, in magical code,
Of the earth and the heavens –
Ivory of narwhal and elephant,
Diamonds from the interiors of stars.
In his right hand he held
The plectrum that could touch
Every wavelength in the Universe
Singly or simultaneously.
Even his posture
Was like a tone – like a tuning fork,
Vibrant, alerting the whole earth,
Bringing heaven down to listen.