The Single Poetic Theme of Life and Death 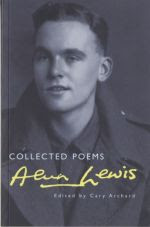 Putting small sections of my library at a time onto the Library Thing site is a slow process, but I find it stimulates me to re-visit authors as I sift the books I have by them. I recently put on books by Alun Lewis who wrote the following to his wife Gweno from India during the Second World War:

“although I’m more engrossed with the single poetic theme of Life and Death, for there doesn’t seem to be any question more directly relevant than this one, of what survives of all the beloved, I find myself unable to express at once the passion of Love, the coldness of Death (Death is cold), and the fire that beats against resignation, ‘acceptance’. Acceptance seems so spiritless, protest so vain. In between the two I live.”

These words were quoted by Robert Graves in an introduction to a volume of Alun Lewis’ poems published in 1945. By this time Alun Lewis was dead and many have found his death to be foretold in the poetry and short stories he produced during those last years. He had corresponded with Graves about ideas which eventually appeared in The White Goddess, a volume which Graves subtitles “an historical grammar of poetic myth” but which later became a manual for many pagans and neo-wiccans seeking a theoretical basis for the revival of Goddess worship. Lewis, though, very much took on Graves’ ideas as an inspiration for his poetry. The “single poetic theme” identified in the quotation moves inexorably from Life to Death leading up to the poet’s actual death (possibly from suicide) in Burma in 1944. Consider ‘Goodbye’ which he wrote for his wife to mark the occasion of their last night together before his embarkation for India:

We made the Universe to be our home,
Our nostrils took the wind to be our breath,
Our hearts are massive towers of delight,
We stride across the seven seas of death.

Here Love triumphs over Death and the mementoes of their night together will sustain them : “And I will keep the patches that you sewed/On my old battledress tonight my sweet”. But the imagery of Lewis’s poems moves inexorably from this saccharine offering to his wife towards Darkness. The outbreak of the War elicited “Dark closes round the manor and the hut”, in itself a conventional enough response to the War. But in India he became increasingly prone to write of Darkness as an ideal state rather than as a metaphor for the condition of the world. His feelings emerge in poems like ‘The Mahratta Ghats’:

Who is it climbs the summit of the road?
Only the beggar bumming his dark load.
Who was it cried to see the falling star?
Only the landless soldier lost in war.

In hospital in Poona a fellow soldier fights against death:

Great velour cloaks of darkness floated up.
But he refused, refused the encircling dark,
A lump of bitter gristle that refused.

But Lewis became obsessed with “the encircling dark”. The “bitter gristle” of Life was increasingly less attractive than “the darkness that there is” figured as deep and containing. In ‘The Jungle’ he wrote of “the black spot in the focus”, an image that came from looking up at the Sun through the enclosing trees, but it also becomes a metaphor for the blotting out of meaning. He saw “The face distorted in the jungle pool/That drowns its image in a mort of leaves”. Here in “the cold orbit of an older world” he lived as a ghost amid a “green indifference” and darkness awaited in the bite of a snake, the swipe of “annihilating paws” or the blow from a “flashing sword”.

Similar themes emerge in the short stories he wrote at this time, although the medium of prose seemed to better facilitate the confrontation and rejection of the impulse to embrace Darkness. In the poems the metaphysical engagement with Darkness seems to lead out of the world as the parallel engagement in the stories seems to affirm the world’s values. In ‘The Jungle’, “the humming cultures of the West” seem far away and fade further as the poem develops. In a story written at about the same time, ‘The Orange Grove’ a soldier becomes totally lost, driving with the corpse of his friend next to him on what seems like an increasingly meaningless journey except that his need to hand in the dead soldier’s identity tag remains his sole purpose. In the poems such purposes cannot be held onto. But the poet in many ways seems less defeated than the prose writer who sustains himself by such tokens of meaning. For the poet, the landscape of Darkness was fully worked out before he set foot in India and provided it own deeper sense of purpose. In The White Goddess, Graves cites Keats’ ‘La Belle Dame Sans Merci’, Spenser’s Phaedria and Malory’s Nimuë as literary analogues to the Goddess who carried the ailing ego into welcome oblivion. Though he says that “Coleridge had a stricter poetic conscience than Keats” as his presentation of the Nightmare ‘Life-in-Death’ in The Ancient Mariner does not honey the bitter pill in the way Keats does. As for Alun Lewis, Graves repeats part of the quotation about “the single poetic theme” in his Introduction to The White Goddess, asserting that for Lewis “there was no choice”.

Whether Lewis understood the theme identified by Graves in quite the way the latter interpreted it is open to question. Graves’ view was clear cut: “For though she loves only to destroy, the Goddess destroys only to quicken”. Lewis certainly engaged with these ideas as defining his vocation as a poet. But he also lived them and his experiences of Life and Love were, it seems, continually juggled against Death as a beckoning reality. Here are final lines of what seems to have been the last poem he wrote :

Or does the will’s long struggle end
With the last kindness of a foe or friend?