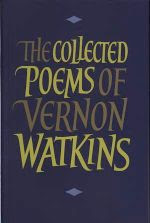 Vernon Watkins is a much neglected poet. Living most of his life in Swansea where he worked quietly, in marked contrast to his friend Dylan Thomas, his seven collections of poems from Faber between The Ballad of the Mari Lwyd (1941) and Fidelities (1968) represent a lifetime of dedication to poetry as a craft. His highly formal style and neo-platonic themes made him an unfashionable voice as he grew older but he never deviated from the view that a poet’s only concern should be “with metaphysical truth”. His exploration of that truth through, for instance, his ‘Music of Colours …’ sequence which explores themes of Light and Dark, was conducted with an intensity that made no concessions to popular taste. He sought, beneath the colours of the world, a purity of whiteness: “O but how white is white, white from shadows come,/ Sailing white of clouds, not seen before/ On any snowfield, any shore;”. But Light and Dark always interact: the white swan, Jupiter, in ravishing Leda, is “ … a great down/ Of thundering light” but “The mound of dust is nearer, white of mute dust that dies/ In the soundfall’s great light, the music in the eyes,/ Transfiguring whiteness into shadows gone,/ Utterly secret. I know you, black swan.”

His poetic mentor was Yeats and he sought to parallel the Irish poet’s use of native material in his own re-working of Welsh themes. He believed that “rhythm and cadence are born in the blood” and that this made him a Welsh poet. His re-working of the Taliesin theme in ‘Taliesin and the Spring of Vision’ represents the poet as one who receives inspiration from the Muse and is able to transcend Time but who must “adapt … to the limitations of time” in order to communicate with others. He corresponded with friends like the artist Ceri Richards and the writer and artist David Jones about these things and referred to these and other artistic associates in his poem ‘The Forge of the Solstice’. Here are the two final stanzas of that poem:

And out of it now falls the winter sun,
Leaving a ceaseless myth of moving waves,
Till darkness quiets all things. Man is one:
The identity survives its many graves.
First was the hunter, then the prophet; last,
The artificer, compounding in one ghost

Hunter and prey, prophet and witness, brought
Into that circle where all riddles end.
Love gives their art a body in which thought
Draws, not from time but wisdom, till it bend
The solstice like a bow, and bring time round
White with young stars, quick from the forge they have found.